We were lucky enough to receive the honor of giving Este Haim acupuncture during her last visit to Toronto before the band’s sold out show at Massey Hall! Rock on. Even though we are known as the best acupuncture clinic in Toronto, it was humbling to know Este chose us to provide acupuncture and moxibustion to maintain her health on their sold out Sister Sister Sister tour. Este has been a crusader for diabetes awareness and has been a positive role model in encouraging those affected by the disease to stay as healthy as possible. We are going to share our unforgettable experience of providing Acupuncture to our favorite band while they stopped in downtown Toronto to rock our bones!!!

Does Este Haim love the Care at Acupuncture Center Toronto? Watch and see…

Este is an example of a busy successful person with a chronic health condition who struggles to manage symptoms as best she can with self-care. She has Type 1 diabetes so regular exercise, rest, eating healthy and stress reduction are hugely important.

“It definitely is not easy but it is manageable, you just have to make it a priority and make sure you stay healthy” Este was quoted in a Newsbeat interview. Being on tour leads itself to irregular eating, dealing lots of stress and constant fatigue from jet lag. After being backstage and getting a tiny glimpse of what rock stars have to keep up with, it’s apparent the lifestyle would be draining on anyone. Este has been public about her dedication to her health. She does her best make sure she eats at regular intervals (great for the digestive system in Chinese Medicine). She fits in stress reduction when possible including getting acupuncture in Toronto! Este knows what it’s like for her blood sugar levels to plummet and has had a close call which almost sent her into seizure at one of her concerts. She decided to manage her illness by incorporating strategies that she could take with her while on tour. Haim the band also has been generous in playing charity shows to support diabetes research. What amazing ladies! When Este told me that she was stoked to receive acupuncture from us we jumped for joy. Not only are their concerts one massive dance party but they also rock so hard. These women are VERY talented musicians, fashion icons and examples of strong women killing it in a male dominated industry. HAIM WAS GONNA CHILL WITH US! 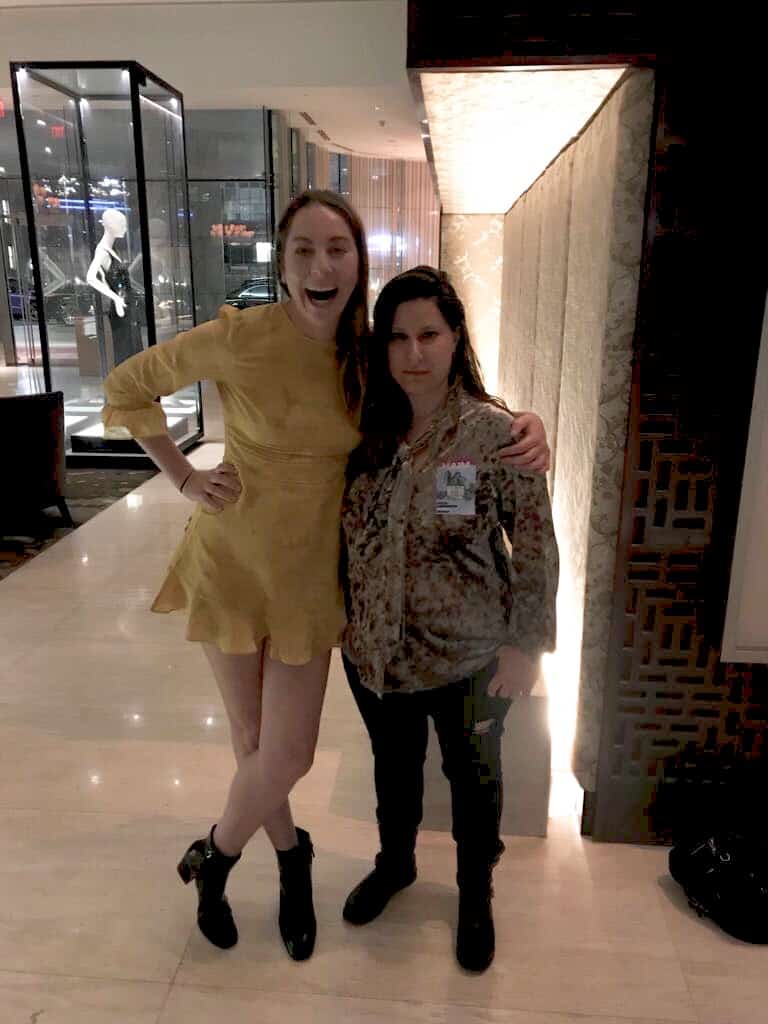 My assistant Marie and I could hardly contain our excitement. I left the clinic early that day to gather as many supplies as possible to make Este Haim feel as cozy as possible. Although Este was far too busy with the tour to visit our downtown Toronto acupuncture clinic, we decided to recreate our calm clinic atmosphere backstage at the venue in Toronto’s Massey Hall. In order to set up a clean and comfortable make-shift Acupuncture clinic, we needed some fuel. Off to Starbucks for some beverages. 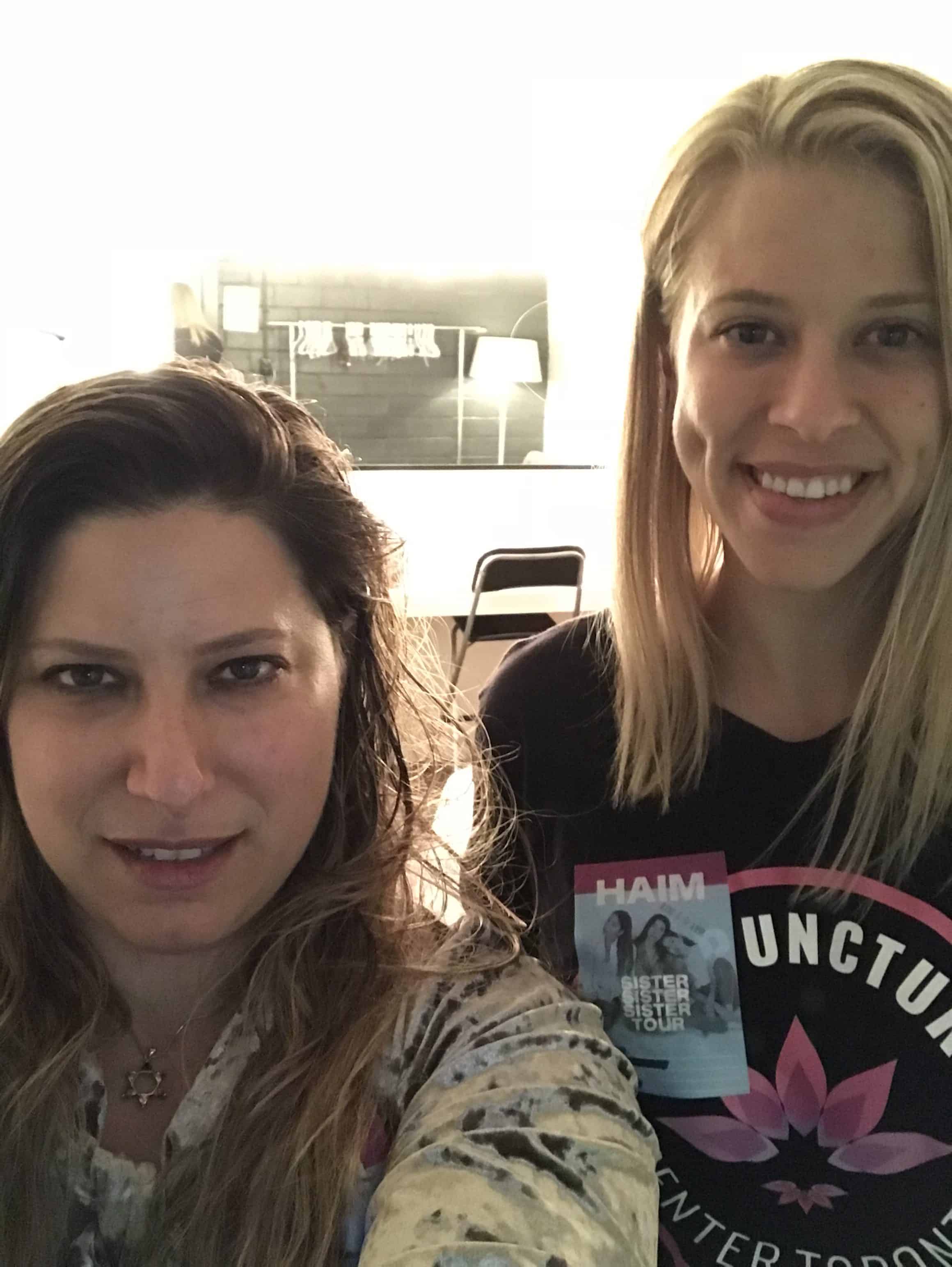 We stopped at Starbucks and took some precious to time pose for a couple selfies and grab a drink. With chai lattes and butterflies in our belly we were off to Massey Hall! Can you tell Haim is our favourite band? 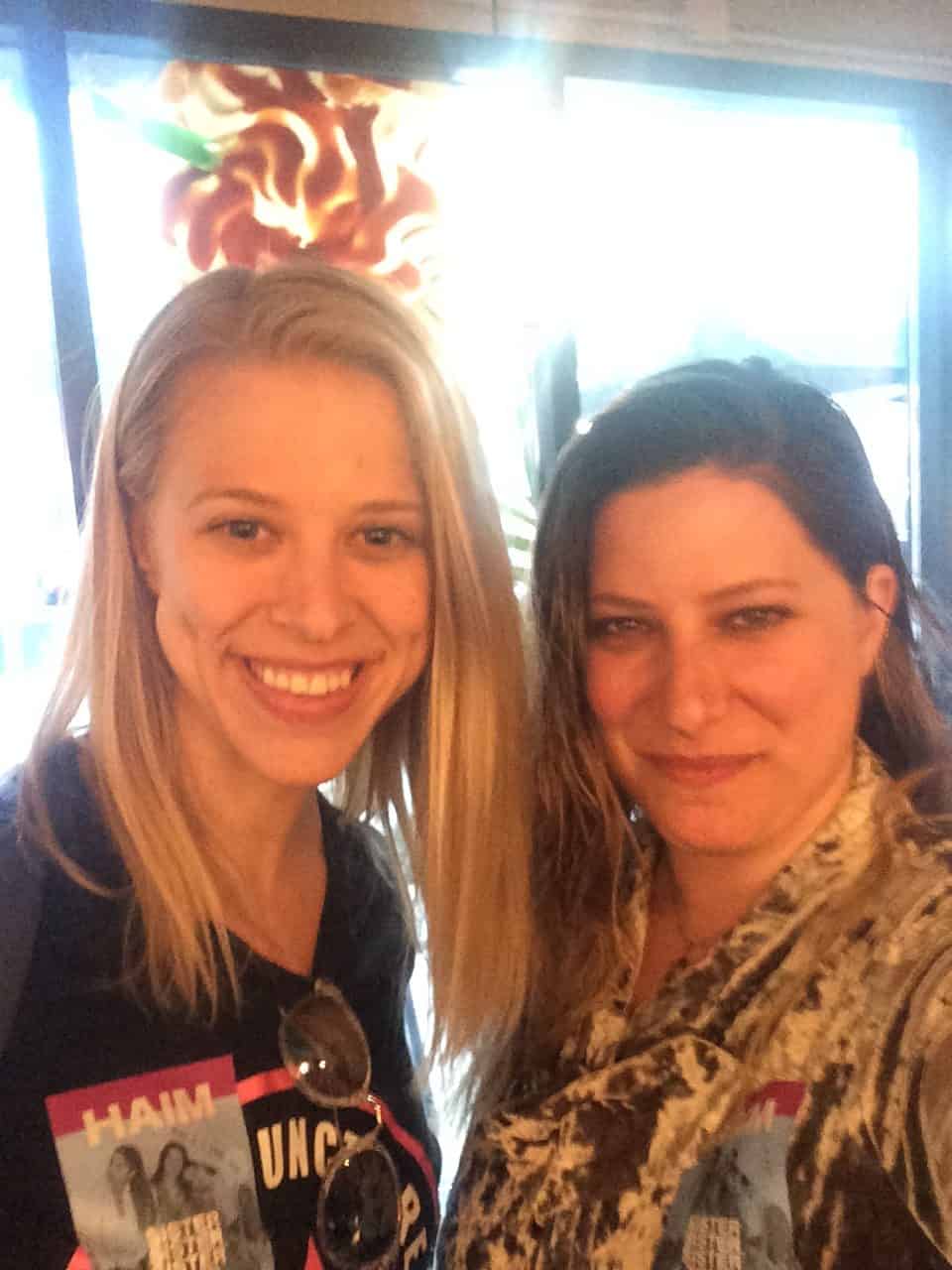 There have been several times I’ve had the opportunity to treat celebrities over my 16 years in practice as an Acupuncturist. Let me shamelessly reminisce about some of those memories. Before the Center’s success blew up, I used to make ends meet doing onsite film industry treatments.  Although I’ve had several opportunities to work with famous people, I’m usually fairly uninterested. For example…there was one time when I turned down an opportunity to give acupuncture to  actress Cybill Shepherd because I had a fully booked day. Another time I was asked to drop everything to treat Neve Campbell in 2005. I turned down the gig because my patients come first and hate cancelling appointments. And then there was the special time I upheld our 24 hour cancellation policy letting go of Megan Markle as a potential patient (true story).  I’m someone that doesn’t watch TV or movies (yea I’m a werido), doesn’t particularly like current music and is arguably the most un-starstruck person you could possibly meet. But Haim…well I’ve always admired and wanted to work with. They give so generously to their fans. When Haim perform, they are all about making the crown move and dance. Their anthems are catchy and rugged. When Este got back to me and said she was down for some Acupuncture, it made my day.  Let’s rephrase that, it made my year!

Marie and I began setting up the room backstage. Everything had to be PERFECT.  While Marie called her sister in the UK to figure out her Spotify account password, I (without haste) set up the massage table. Fresh sheets and some basketball shorts for Este to get cozy in were laid down. 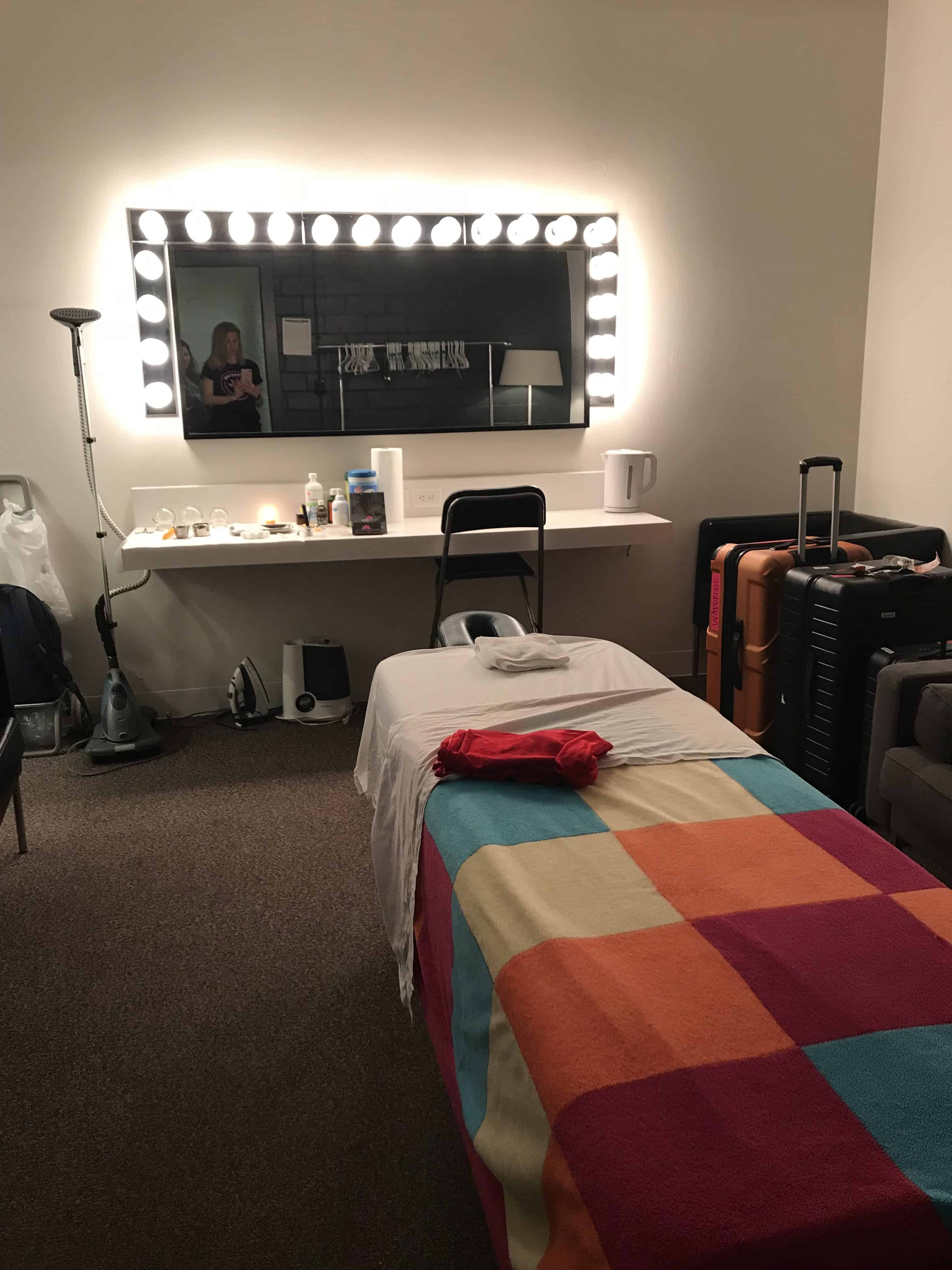 We carried into the venue all of our supplies to provide any of our services that Este wanted to try including cupping therapy, moxibustion, clinical acupuncture and gua sha. My hands were set to massage whatever was tense. Marie got a hold of her sister and the next thing we knew the Spotify was pumping some sweet new age relaxation music for Este to drift away to. When we looked over saw all their microphone walkie talkies we were so excited to meet and treat them with Acupuncture! 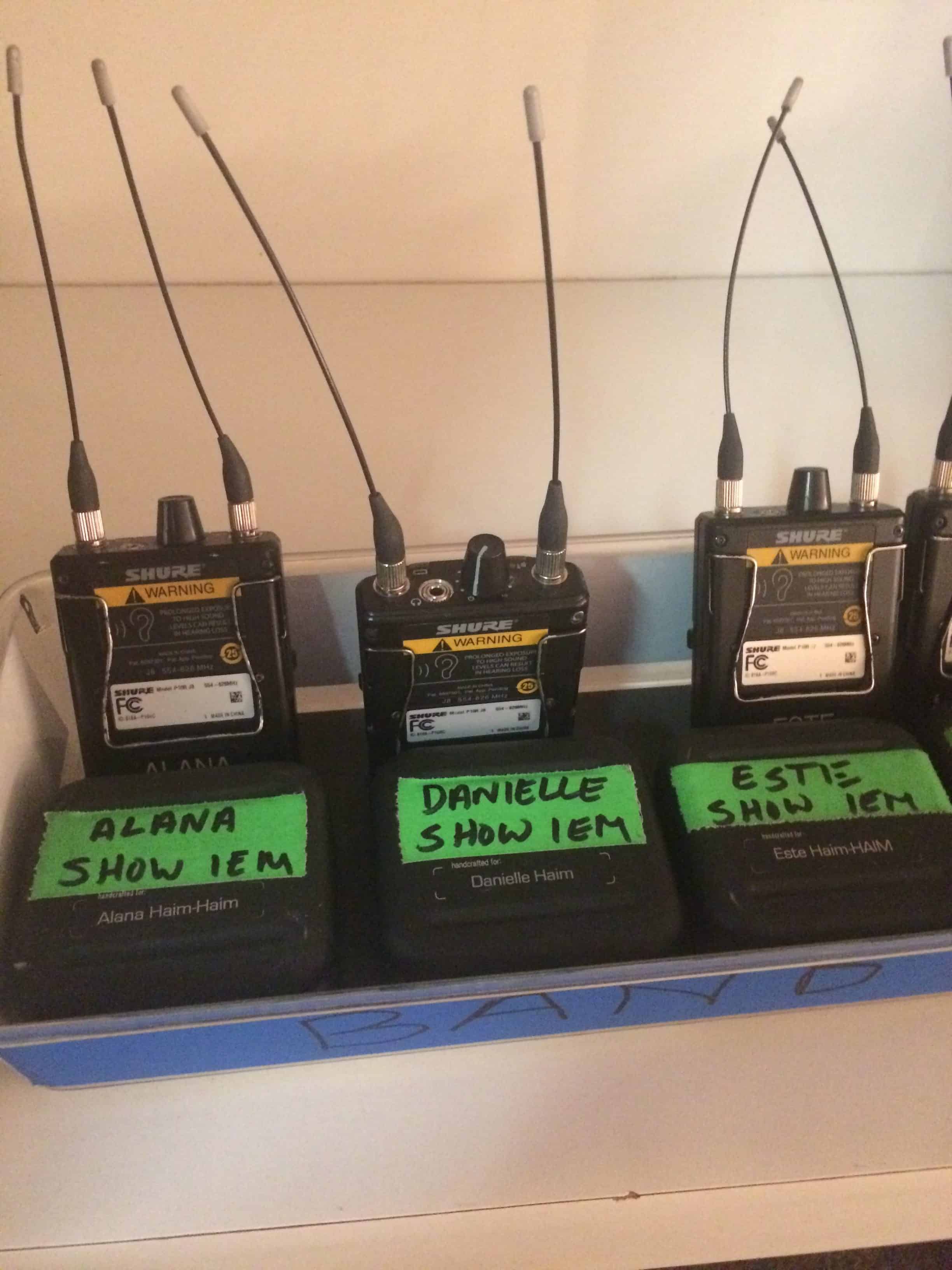 Seeing Danielle, Alana and Este’s mics backstage at the Haim show. The excitement was palpable! But we had a a makeshift acupuncture clinic to set up backstage so back to work.

The next thing we knew Alana and Este Haim walked into the dressing room and immediately gave us a hug and introduced themselves. Alana expressed she was happy that her sister Este was going to get a treatment. Este mentioned later that Alana is scared of needles. LOL.  We got our eye on you Alana. You’re forgiven for not understanding we are locally famous in Toronto for having the most gentle touch when it comes to needling patient during acupuncture. But hey, no hard feelings.

Este Haim gets acupuncture and moxibustion

I won’t go into detail about the specifics of the treatment (for obvious privacy reasons). But I will say treating Este was incredible. She is one of the most kind, down-to-earth polite patients I’ve had the pleasure of giving acupuncture to.  She was so appreciative to have us come to her at Massey Hall and expressed this many times. She expressed how much her body needed the care as Toronto was in the middle of the leg of a sold out world tour. 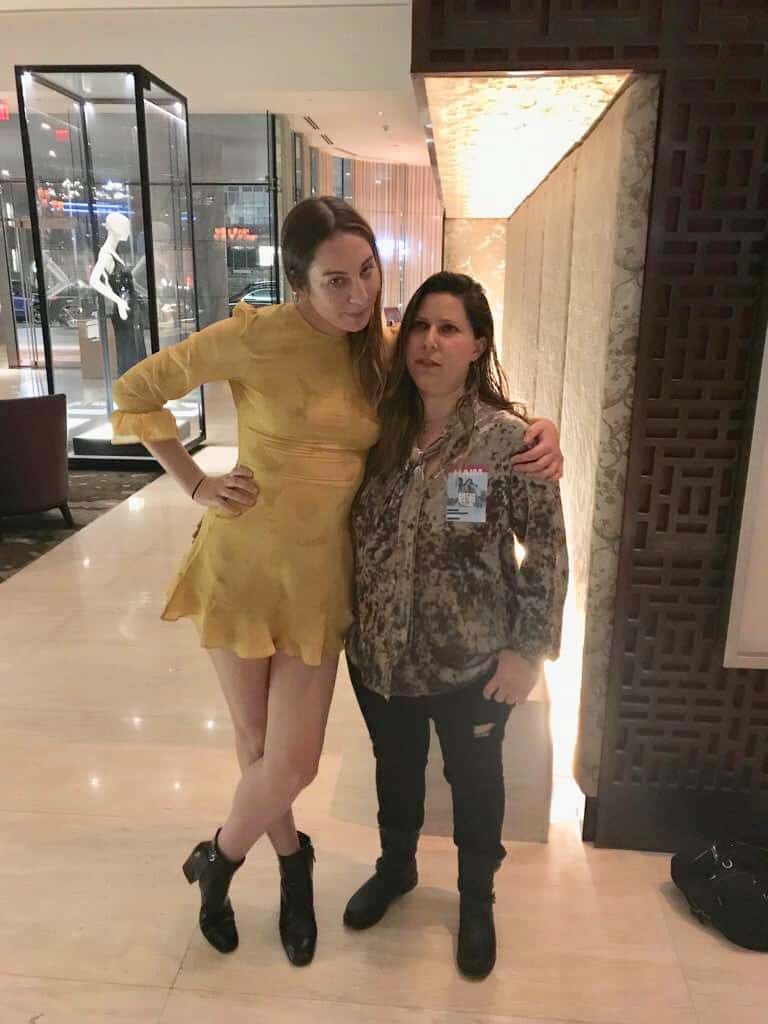 When Este referred to me as a fellow Jewess and lady boss we were like old friends. Este is just like that. She has a way of connecting with people that enhances her art and makes everything joyously fun.  She is known for her facial expressions and I’m known for not taking myself too seriously. So when the camera shutter opened so did our mouths at the exact same time. It just happened. Just like that. Click. 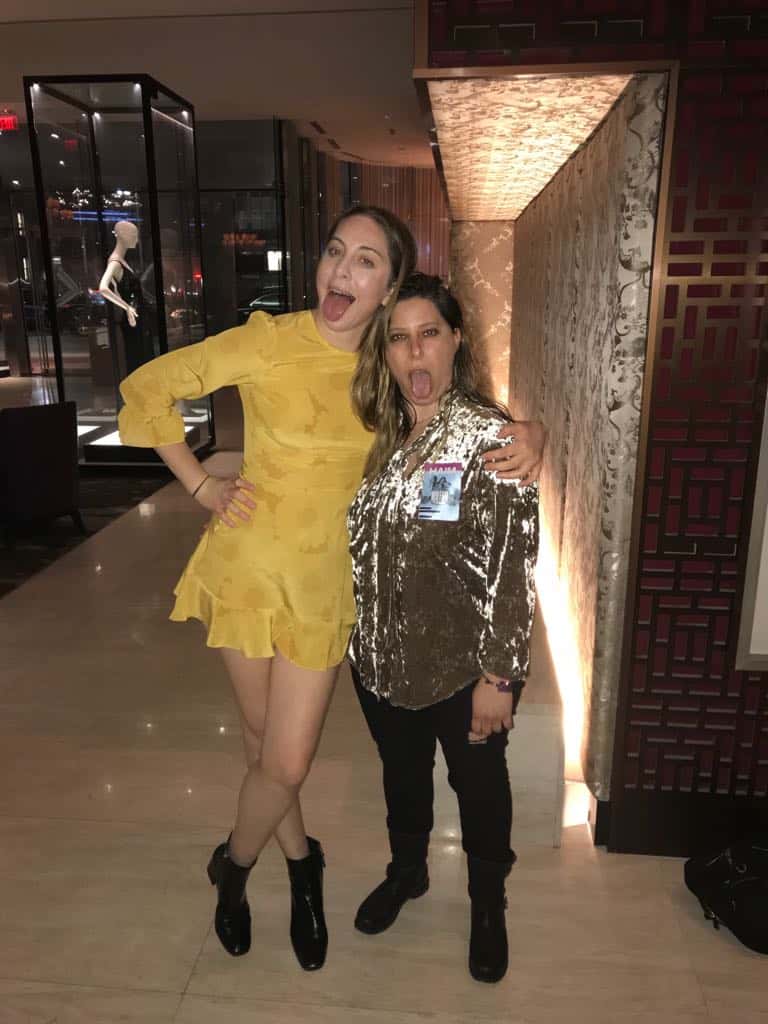 We can’t wait to rock out with Haim again. Thank you for an unforgettable show and amazing treatment experience!